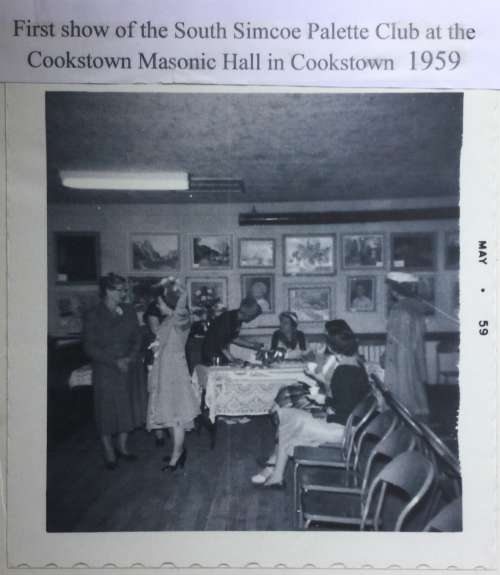 The South Simcoe Palette Club is a group of leisure time artists who have been meeting regularly in the Alliston area since its beginnings back in the 1950's.

The club had its beginnings in Cookstown in 1955, when a group of ladies taking lessons from artist Jessie Monkman decided to form a club and put on an art show. The first art show was held at the Cookstown Masonic Hall. The first shows were very formal as the ladies wore long dresses, hats and gloves and poured tea from silver services.

The membership continued to grow and in 1972, there were 20 members who paid $1.00 each annually to join. The club met one Wednesday evening a month in each others homes and held buisness meetings and always had a volunteer guest artist to show slides, have talks or give art instructions.

In March 1972 Banting Memorial High School offered the club the use of its art room for every Wednesday evening. The club graciously took them up on their offer and many strangers became friends during that year and alot of art was accomplished. This also was the year of "Project Banting" , members hung their paintings in the schools lounges and hallways.

In January of 1973, the Palette Club was asked to display their art work at the official opening of the Alliston arena's new wing. Later that year an art show was also held in the Arena. September of 1973, the membership rate increased to $3.00 per member and it was decided that coffee would be served at every meeting at a cost of 15 cents. The clubs objective has always been to support the arts in the community and thus decided to give a bursary gift of $25.00 to a Banting Memorial H.S. art student who showed promise in art. Later that fall a motion was made to move the annual Fall art show to the spring and to charge no admission, the reason for this was to not compete with the Orangeville Art Club's Fall art show and also the Banting Cafeteria would be available in the spring free of charge. Another advantage was that Mrs Peterman would make coffee, tea and cakes for the club. The motion was carried.

The club paticipated for the first time in the Alliston Potato Festival in August of 1975, 2 paintings were sold!

In 1981, the club entered art in to the Beeton Honey Fest and the Rosemount Cider Festival. That year they also paid a $5.00 fee to the S.C.A.C.A (Simcoe County Arts & Craft Association) which we now know today as the Simcoe Arts Council. It was also decided to increase the Banting Bursary to $50.00. The art teacher was responsible for deterimining which student would recieved this bursary.

Sadly in September of 1981 the founder, Mrs Monkman passed away. also in 1981, the club started using the arena on the 2nd and 4th Tuesday of each month to paint during the day.

Each year, the club struggled to find a place to have host an art show. It has been held at the Shelton Hall in St John's United church, the Alliston Public Library, the Alliston Arena and finally a new more permanent place, the gymnasium at St.Pauls Catholic School. Invitations were always printed and the mailing committee would mail them to local dignitaries, friends, and family. Tables were always set up and refreshments and tea were served. Guest artists would paint during the show, while the public watched. There was always entertainment, the first year The Golden Bells performed, and the Alliston Polka Band. In the many years to follow, they have had organists, a harp player, school bands etc. To raise funds for the club, tickets were sold to win prizes, there also was always an art piece donated by one of the guest artists and also by one of the members of the club ( the framing was paid for by the club) and a few items from the community.

Over the years, the club flourished and in Feb 1986, they had a surplus of funds so decided to hire an artist to teach a full day workshop. This was such a sucess that they held another one later that spring. That spring they had 39 members, the highest number to date.

Banting Memorial High School's free art room became unavailable in October 1995. The club struggled to find a place to regularily meet, and finally settled on Holy Family Catholic School. It was also decided that fall to increase the membership rate to $15.00 so the club could afford to hire better artists for the popular workshop days. It was decided to pay the srtists $100.00 and each member attending would pay an extra $10.00 fee and non members would pay $15.00 for the day.

April of 1996, the Palette Club found that they were no longer able to sell tickets for their fundraising draw due to new government rules. To get around this, it was asked that each member would make 10 - 15 bookmarks to sell. With the purchase of a bookmark, you would also recieve a ticket to the draw. Artists got creative and painted, sketched, cut up water colour paintings, etc for their bookmarks.

The Simcoe Palette Club was one of the first clubs in Alliston to donate funds to the Gibson Centre Building Fund in support of the building and promoting arts in the Allsiton area.

When the Ontario Government decided to start charging for using school space, the Palette club once again faced the challenge of trying to find new locations for their annual art show. They have successfully held them at the Gibson Centre, The Cookstown Public Library, The Adjala Tosorontio Town Hall, and most recently the Tanger Outlet Mall.

Over the years, many of the members have been with the club for quite some time. Norma Van Leeuwen is currently our longest time member, joining the Palette Club in 1980 ( 35 years). Cynthia Foster, Pauline Owens, Grace Peters and Ruth Draper are also long time members, who remember the club going on many outings, and spending plein air art trips to cottages, and a few of their homes. In 2008 the club had its 50th year anniversary with several dignitaries and a formal recognition to Ruth Draper, a long time member herself as well as her mother Mrs Ireland who was one of the first members.

The club no longer meets in the evenings, they meet regularily every Tuesday during the day and have alot of fun painting together. Workshops are still an integral part of the club and they still continue to donate to bursaries, $50.00 to 2 art students yearly, one to Banting Memorial High School and one to St. Thomas Aquinas Secondary School.

To view some of the many photos taken over the years please look in Gallery under history of Art Shows.